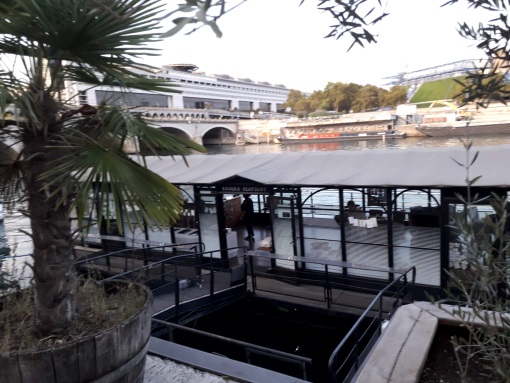 Last October I enjoyed a lovely evening on a barge called « Le Kiosque Flottant » on the Seine river in Paris preparing a birthday meal for Cindy and her family and friends. The evening’s theme was globe-trotting. I prepared French, Italian, Mexican, Laotian, Japanese, Russian and American specialties with love and passion. The magnificent setting, the convival atmosphere and pleasant guests all contributed to a successful and memorable event.

Further information regarding  « Le Kiosque Flottant » can be found at : 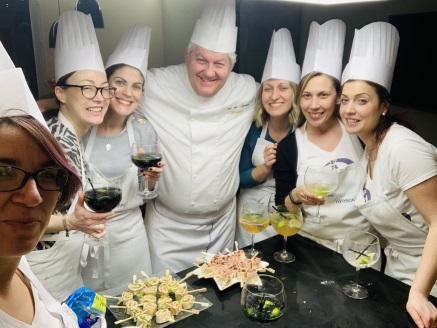 A cooking class with friends is a way to share precious time together while learning and having fun. These young Portuguese mothers enjoyed an evening without their husbands and children. I enjoyed their hospitality, the convivial atmosphere and their efficiency in the kitchen. 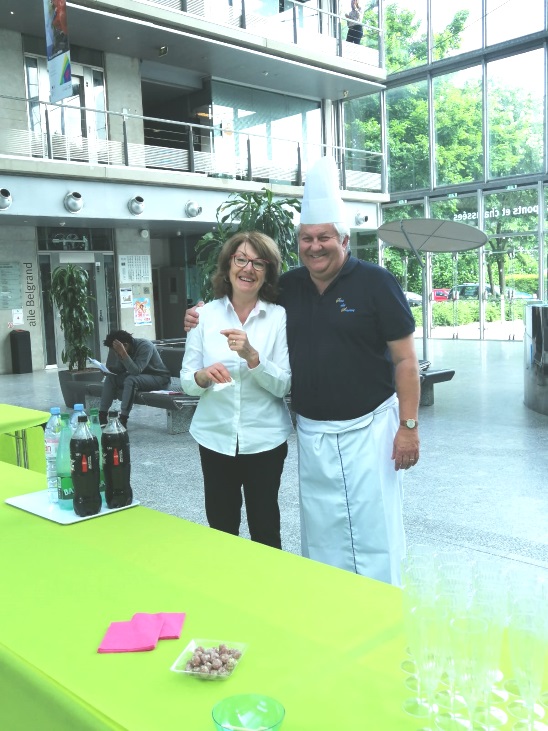 This week I was asked to organise a cocktail for 60 personnes at the campus of the prestigious « Ecole Nationale de Sciences Géographique » in Champs-sur-Marne. One of my original homemade fingerfood recipes on the menu was a beetroot wrap with raspberry flavored houmous and spring onions. You can see other specialties for this type of event in the « Discovery » menu above. 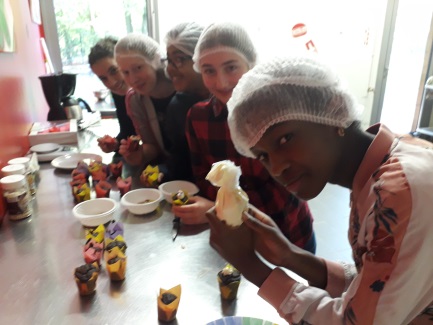 Beginning with the cacao tree and ending up with a chocolate bar we gained valuable knowledge about the origins and processing of cacao. After tempering, moulding and decorating differents forms of chocolat, we took pleasure in tasting our chocolat creations. Once again I would like to thank Laura and Celia for their unceasing giggling. Also I would like to thank the municipality of Champs-sur-Marne for making this great adventure possible. 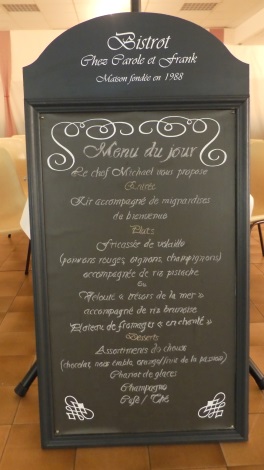 We simply want to thank you for the quality of your services on September 22nd.

From the moment we first met, we were enchanted by your special attention to our needs, by your propositions and by your commitment . The celebration of our 30th wedding anniversary in the evening of the 22nd of September was a major success in part thanks to the subtleness of the dishes that you prepared. We were confident about the meal from the very beginning. The ice cream stand was a great success in that the children took over and served the elderly guests.

Once again, thanks a million!

At the end of August the reception hall « l’atelier Lucullus » in Rueil-Malmasison was the setting of a genuine oriental wedding celebrating the mariage of Mouna and Ferhat, a charming and elegant couple.

Guests were first welcomed with traditional oriental pastries, tea and coffee. Chef Michael then offered homemade Algerian delicacies known as boureks and tchoutchouka followed by an original main dish consisting of lamb. The traditional Algerian music created a magic atmosphere in the reception hall as well as in the kitchen ; an event that didn’t leave me indifferent.  .Yes, we were also dancing in the kitchen (not as impressively as the guests) ! The guests appeared to be all professional dancers, what a sight of beauty.  Once again I congratulate the newlyweds and thank them for the opportunity to have participated in such a special event. 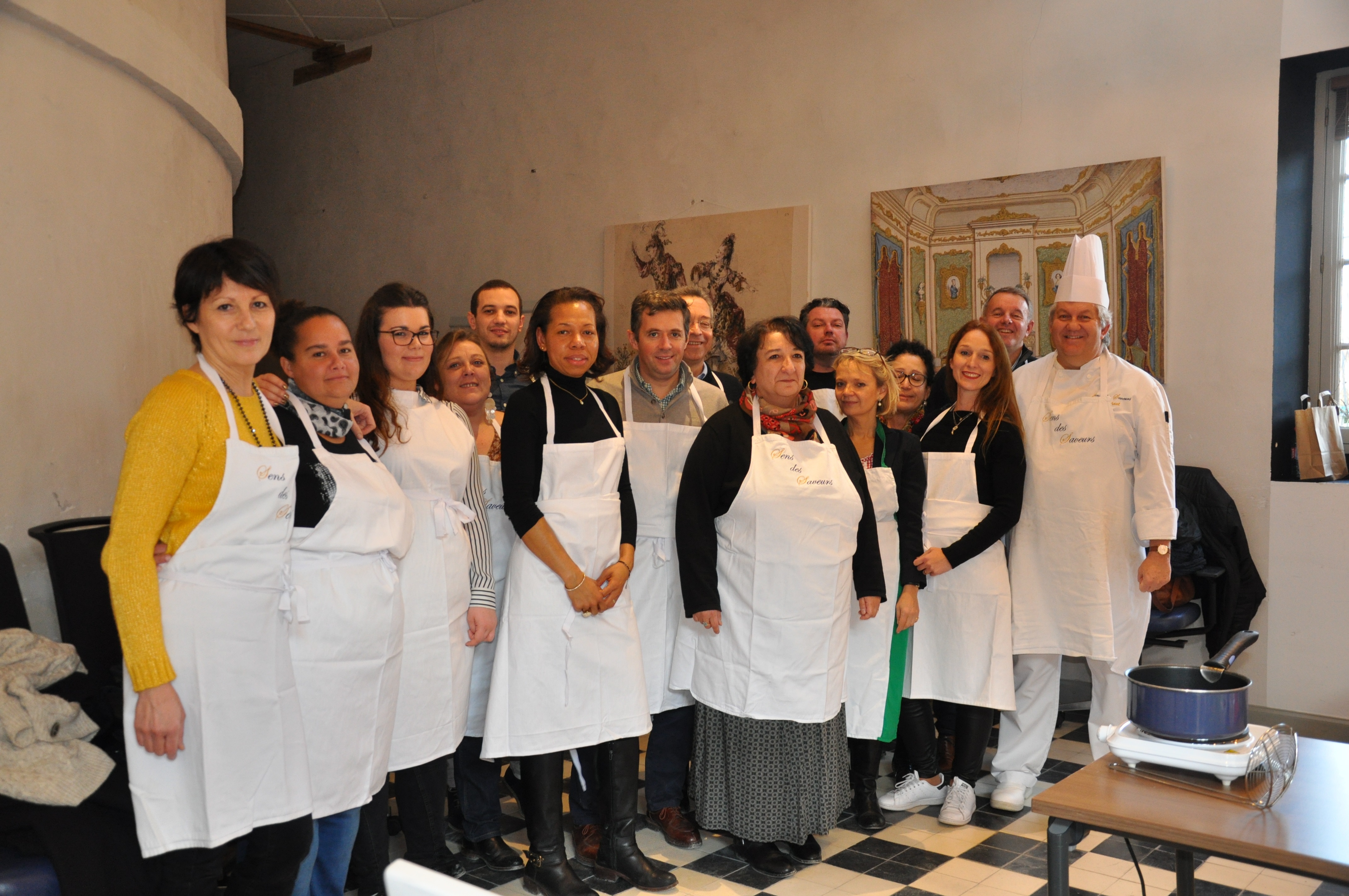 Cooking course at the Guermantes Chateau

On Friday the 9th of December I had the pleasure of organizing a tailored cooking course for Amundi Asset Management. The group learned to assemble some holiday fingerfoods; salmon wraps, foie gras toasts with crispy fried onions and balsamic cream and puffed pastries. Below are some pictures of the cooking course. 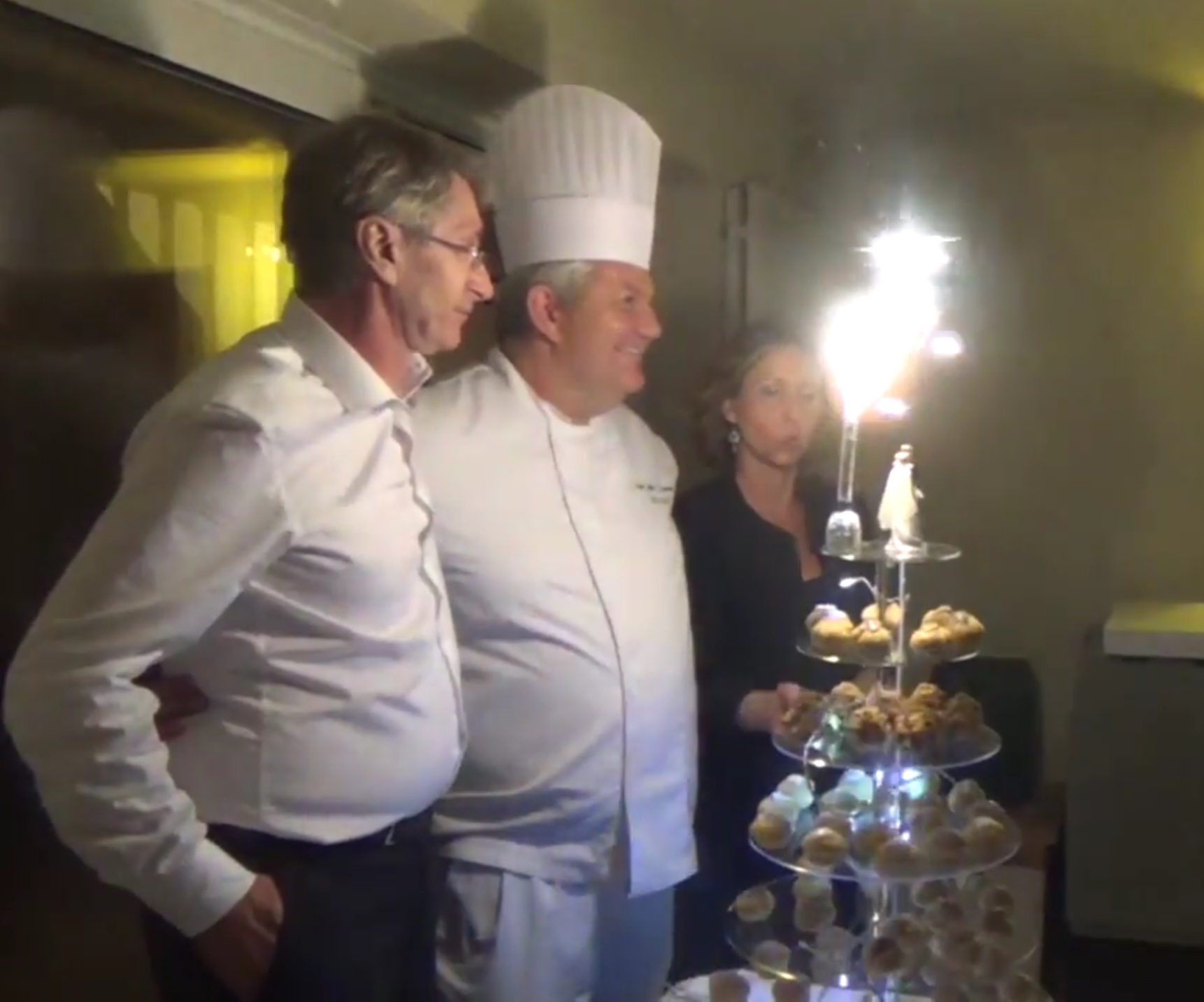 View a wedding in Bry-sur-Marne filmed in August of this year. Note the puffed pastry structure which differs from the traditional French “pièce montée”. 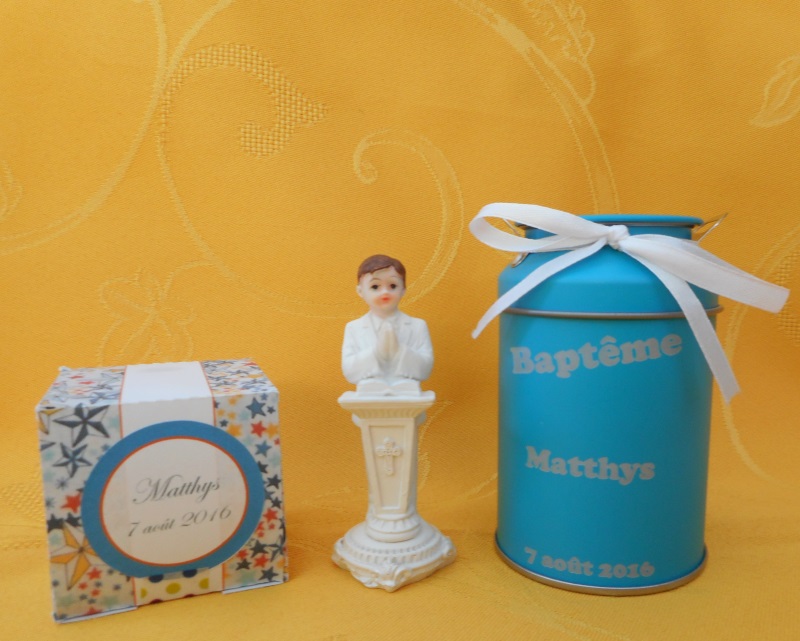 I recently shared a very pleasant day with you, your charming parents, grand-parents, aunts, uncles and friends, some who made the trip all the way from Martinique to celebrate your baptism in Champs sur Marne.

The menu was composed of a tossed salad with apples and raspberries with a black currant/walnut oil dressing, stewed poultry with chanterelle mushroom sauce, baked zucchini with onions and emmental cheese and basmati rice. The final course was an assortment of desserts including a fruit salad, Toblerone mousse and a delicious fruit cake.

While I have never visited Martinique I am already acquainted with some of the island’s treasures:   la Liqueur « Interdite », rum , « vegetarian » peppers, the inhabitants…..

Once again thank you for this wonderful day.
Michael Kolafa

The Euro 2016 soccer tournament kicks off on Friday, June 10.

Savour Michael’s original barbecue sauce on a rack of tender and juicy spare ribs and barbecued chicken. Side dishes include baked potatoes, corn on the cob and salad. Brownies for dessert.

Whether you represent a company or an association you have a great opportunity to create a festive event and enjoy the remarkable achievements of your favourite team as well as your chef Michael Kolafa.

See the following link for schedule of Euro 2016 games : fr.uefa.com 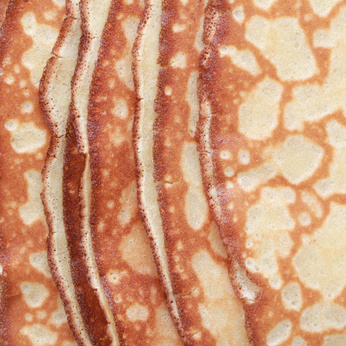 Sens des Saveurs can set up a « Crêpes » or pancake stand if you are located in the Paris region so that you can celebrate the traditional « Chandeleur » Day on February 2nd  in a convivial setting .

The basic offer* starts at  3,50 euros/crêpe with a minimum of 40 crêpes and a maximum of 150 crêpes

Please feel free to contact me at your convienience. 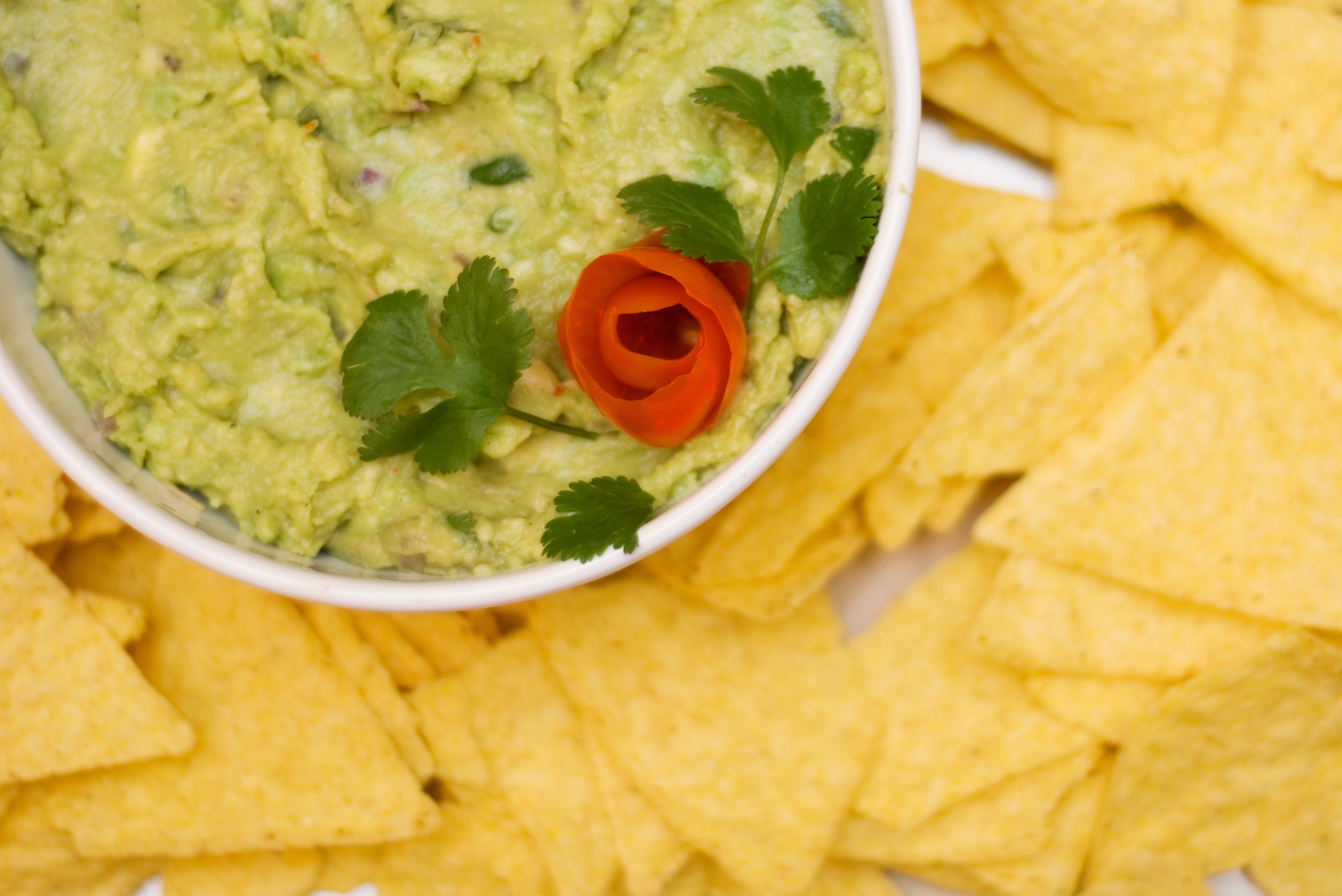 Crea Family: Do It Yourself Fair for Families

On Sunday, November 8, 2015, I will be offering 2 cooking classes at the family fair which will open its doors to the public from 10 AM to 6 PM.

For just 8,- you can participate in one of the 2 courses; Pancakes (ages 6 and above) or Guacamole (adults).

The number of participants per course is limited to 8 persons.

For more information on other courses and activities please visit the official website at www.creafamily.fr  .

The Eiffel Tower (a culinary innovation)

A traditional French tiered wedding cake better known today as a “pièce montée” consists of a structure of cream filled puff pastry balls that are assembled with large quantities of caramel.

The actual inventor of the first pièce montée, which back in the days went by the name of Croquembouche, was a royal cook named Antonin Carême (1784 – 1833). The original pièce montée consisted of a pyramid of fruit, walnuts and glazed chestnuts.

The one unpleasant aspect about a pièce montée that has existed for centuries is the awful feeling of caramel sticking to your teeth. Not having seen a pièce montée served with a toothbrush and toothpaste anywhere, I decided to revisit this recipe without dental accessories.

To assemble a structure such as the Eiffel Tower without using huge blocks of sticky caramel I created a rice cake with salted butter caramel. The light rice cake structure is served with a cream-based cake, adding a crunchy texture and a more balanced sweetness than that found in traditional recipes.

After some initial setbacks during the assembly process, I discovered that there is substantial engineering involved in building an edible Eiffel Tower. There is more to it than just rice and sugar. Please be reassured: there are no iron bars in this recipe.

I hope you will be tempted by this new innovation if you are organizing a Paris theme event. The Eiffel Tower comes with flashing light decorations and other goodies depending on time and budget constraints. 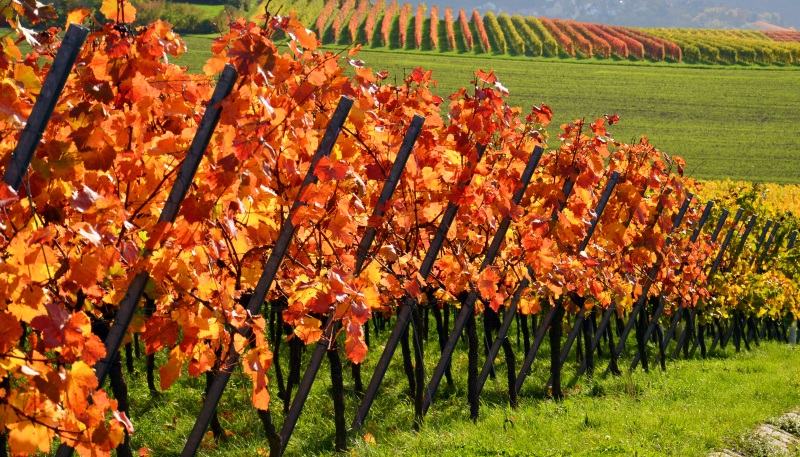 How many bottles will I need for my wedding?

After having interviewed some experienced sommeliers, I will attempt to provide you with an answer. Please note that the consumption levels are indicative and will vary depending on weather conditions (if the temperatures are quite high you should make an upward adjustment to the numbers provided) and on the organization of your wedding (whether or not you include a preliminary champagne reception before the meal).

The math gets a lot easier regarding the wine. The average adult guest consumes roughly 2.5 glasses (14.5cl) of wine. A 75cl bottle fills 5 wine glasses and represents what you’ll need for 2 guests. Consequently, all you have to do is divide the number of guests you are inviting by 2 to determine the number of bottles of wine that you’ll need. Here is an example: If you are expecting 100 guests you’ll need 50 bottles of wine.

You don’t have to buy your beverages from Sens des Saveurs. I wish you success in you endeavor to find the best deals and remain at your disposition for advice related to the type of wine which best suits your meal.